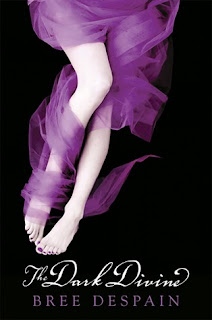 
Synopsis:
Grace Divine—daughter of the local pastor—always knew something terrible happened the night Daniel Kalbi disappeared and her brother Jude came home covered in his own blood.
Now that Daniel's returned, Grace must choose between her growing attraction to him and her loyalty to her brother.
As Grace gets closer to Daniel, she learns the truth about that mysterious night and how to save the ones she loves, but it might cost her the one thing she cherishes most: her soul.

I really enjoyed this book.  For a first novel, this is really good. Usually you get info dumps, and too many characters, and the plot is really, really twisted, but not in this one.
Okay, maybe there was a little info dumping, but that’s okay because Bree makes up for it with her characters. Grace sometimes got on my nerves for being a goody two shoes, but when she did break the rules, I felt that same rush she did. I really liked how she was bossy yet kind and compassionate. I could tell that she cared a lot about others and that she really was divine. Daniel on the other hand was what my mother would call a delinquent. I liked that he was a bad boy, but seriously? Clichéd much?
The story of werewolves was also quite interesting. It was original and believable. Bree Despain obviously did a lot of research on this story because I learned a lot about werewolves. I liked the whole moon stone involvement and how it tied to the story. The plot was fresh too, but the character’s reactions to things were pretty off. SPOILER Take Grace for example, when she finds out that Daniel’s a werewolf, she acts completely calm and starts to ask him questions about it. I don’t know about you, but I’d totally freak out. SPOILER OVER
All in all, The Dark Divine is a good story for those paranormal lovers. I can’t wait til’ the next book, The Lost Saint, comes out. Four out of five stars!
Grade: 4.5 Stars
Posted by Danna (Bananas For Books) at 5:22 AM