Review: The Adoration of Jenna Fox 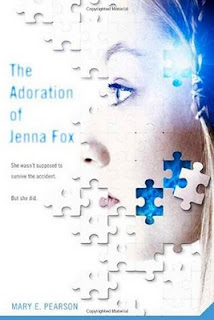 
Synopsis:
Seventeen-year-old Jenna Fox has just awoken from a year-long coma — so she’s been told — and she is still recovering from the terrible accident that caused it. But what happened before that? She’s been given home movies chronicling her entire life, which spark memories to surface. But are the memories really hers? And why won’t anyone in her family talk about the accident? Jenna is becoming more curious. But she is also afraid of what she might find out if she ever gets up the courage to ask her questions. What happened to Jenna Fox? And who is she really?

My Thoughts:
I bought this book based on its cover. This can be a good thing or a bad thing. For me, it was a very good thing.

Show Spelled goo-d: bet·ter, best, noun, interjection, adverb
–adjective
1. morally excellent; virtuous; righteous; pious: a good book.
The Adoration of Jenna Fox is a dystopian novel and what I found interesting was how the author wrote the future in this book. Out of all the dystopian books I have read, this one seems to be the closest future to ours (I think). In Jenna Fox’s world, bioengineering has taken off and people who have lost a limb or many limbs have gotten them back (just not in their original skin).
Jenna is a very interesting character and I find it kind of sad how she doesn’t remember anything and her grandmother hates her because she thinks that the real Jenna is gone. Throughout the book, Jenna becomes a stronger person and learns to be more independent. When her parents finally get it through their heads that she needs to be around other people, they send her to a small school (when I say small, I mean five or six people going to it.)
Two of the characters Jenna meets (Gabriel and Zane) at the school don’t have any purpose. She talks to them a couple times in the book and then you never see them again. I at least thought that Zane was going to have a higher purpose in the novel because he lived down the street from her. Oh well, the other two characters (Alyss and Ethan) become her friends. I really liked the relationship between Jenna and Ethan. They had romantic feeling for each other but it never got in the way of the main idea of the story.
This book was really good and it showed me to be more aware of the environment and life. The Adoration of Jenna Fox is an emotional read that you should buy immediately.
Grade: 4 Stars
Posted by Danna (Bananas For Books) at 7:32 AM