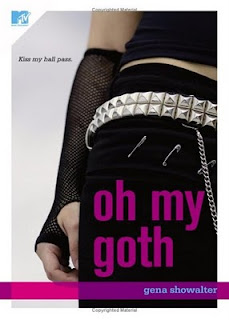 
Synopsis:
Jade Leigh is a nonconformist who values individuality above all else. She has a small group of like-minded Goth friends who wear black, dabble in the dark arts, and thrive outside the norm. They're considered the "freaks" of their high school. But when Jade's smart mouth lands her in trouble — again — her principal decides to teach her a lesson she'll never forget.
Taken to a remote location where she is strapped down and sedated, Jade wakes up in an alternate universe where she rules the school. But her best friends won't talk to her, and the people she used to hate are all Goth. Only Clarik, the mysterious new boy in town, operates outside all the cliques. And only Mercedes, the Barbie clone Jade loathes, believes that Jade's stuck in a virtual reality game — because she's stuck there, too, now living the life of a "freak." Together, they realize they might never get back to reality...and that even if they do, things might never be the same.

My Thoughts:
I said this before in my review of The Book of Luke:  I LOVE MTV books. Oh My Goth was not an exception.
Gena Showalter is a pretty good writer, I liked the way I could somewhat feel what Jade was feeling. I like showing my individuality and, like Jade, I hate how most people dress, act, and talk the same. I could really relate to her because even though she was an outcast, she still had friends, family, and a crush.
I didn’t like how the high school life was shown. It seemed totally fake to me. I mean, in both the virtual world and the real world, someone was worshiped like a God. That’s not how it is in most high schools. There may be a really popular person that you know about, but you just don’t worship them.
The idea of the book was interesting too. It reminded me of Spy Kids 3D, only it’s not a video game and it’s for students who need to be taught a lesson. When Jade and Mercedes go in to the game, they switch places in the social kingdom (with all the people who were Barbie clones being Goth clones and all the Goth freaks becoming Barbie freaks (Jade leading the Goth clones and Mercedes leading the Barbie freaks).
Overall, Oh My Goth was a fun read and I can’t wait to read some of Gena’s other works (I’ve read Intertwined and am saving up for the second book). If you pick it up, hopefully you’ll like it too.
Grade: B
-Danna
Posted by Danna (Bananas For Books) at 2:40 PM