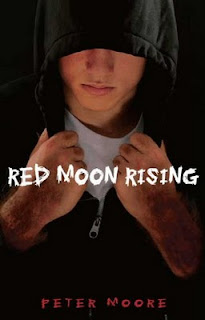 
Synopsis:
Being only half-vamp in a high school like Carpathia Night makes you a whole loser. But Danny Gray manages to escape the worst of the specists at his school. Thanks to genetic treatments he had as an infant, most people assume Danny's other half is human. Which is a good thing.   Ever since the development of synthetic blood – SynHeme – vamps have become society’s elite, while wulves like his father work menial jobs and live in bad neighborhoods.  Wulves are less than second class citizens; once a month they become inmates, forced to undergo their Change in dangerous government compounds.
For Danny, living with his vamp mother and going to a school with a nearly all-vamp student body, it’s best to pretend his wulf half doesn’t even exist.  But lately Danny's been having some weird symptoms -- fantastic night vision; a keener-than-usual sense of smell; and headaches, right around the full moon.
Even though it's easy to be in denial, it's hard to ignore evidence.  There's only a month until the next few moon, and Danny's time is running out.

My Thoughts:
When Disney Hyperion sent me an email asking to review this book, I was like “Ok, I’ll try it”. I wasn’t expecting for this book to be so funny and relatable.
The whole idea of the book reminded me a lot of true blood (with the synthetic blood and everyone knowing about vampires and werewolves). It didn’t seem original, but Peter changed it up so it made me think differently about vampires and wolves. In the society he made, most people were racist, or specist, against wolves. Kind of like how whites were “better” than blacks in the early ninety’s, except worse. The story got a whole lot better with Danny being half wolf half vamp.
I absolutely loved Danny (Dante). He was funny and sensitive at the same time. Best of all, since this book is written by a guy in a guy point of view, I kinda got to know how guys think. I really liked how his decisions seemed real and not made up. Like him choosing whether or not he wanted to live with his dad. Also, his relationship with the human girl Juliet seemed real to me. They became friends and then something more, not just “Oh my god, I love you!”
The only thing I truly didn’t like was the ending. It didn’t feel like a conclusion to the book and it didn’t tie up any loose ends. Is there going to be a second? Anybody? Anyway, I really didn’t like the ending.
Overall, Red Moon Rising was a funny coming of age story filled with friendship, romance, and awesome hilarity. If there is a second book, I’m so reading it.
Grade: 4 Stars
Posted by Danna (Bananas For Books) at 6:32 AM