Review: The Rendering by Joel Naftali 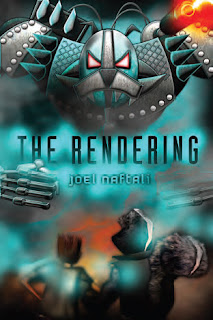 
Synopsis:
Thirteen-year-old Doug narrates in a series of blog posts (many interrupted by either his best friend, smart girl Jamie, or the artificial intelligence who mothers him, the avatar) how he came to temporarily save the world and to be branded a terrorist and a murderer. He was innocently playing video games in the employee lounge of the biotechnology center where his aunt was a director when an insane genius ex-employee broke in, stole the equipment to digitize anyone and make his own biodroid army, killed Doug's aunt, and blew up the center (and soon the nearby town). Doug managed to escape, accidentally creating three super-powered creatures, and gaining a electronics-destroying superpower of his own with which to fight the evil Dr. Roach.


This was a really cute book! The cover’s not really pretty, but the story itself was fantastic.
The Rendering is told in blog posts which I think is really cool. The main character Doug is just your average thirteen year old-except that he’s wanted for murder by the government. I really liked that Doug had an awesome sense of humor even though he was being hunted down by VIRUS and the government. The skunks were also awesome characters. My favorite was Cosmo because he was so hilarious. The super powered skunks are so adorable because 1) they’re skunks and 2) they’re funny and dangerous.
Joel Naftali is a genius for telling this story. The whole idea of some evil guy wanting to transfer everyone into a world that he can control is exciting and fun to follow. The Rendering is definitely a book you don’t want to miss out on. The only thing I didn’t like was the cover:P
Grade:B+
Posted by Danna (Bananas For Books) at 6:16 AM