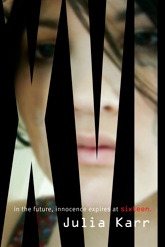 Julia Karr is young adult debut author of XVI and she has graciously accepted to do an interview here at Friendly Reader. Without further ado, here's the interview!

Describe your book in three words
Feminist Dystopian Thriller
Who do you relate to most in XVI?
I’d have to say Nina. I understand her totally!
What's the craziest thing you've ever done? 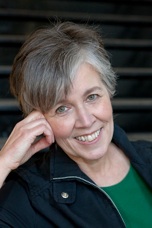 Oh - too many things! And so many of them I would not want anyone else to try! I suppose cutting off all my hair and throwing it in the incinerator, so my mom couldn’t track me down when I ran away. Of course, I ended up going back home... which was probably a good thing. That’s maybe not the craziest - but, it’s one that I just remembered.
When you were little, what did you want to be when you grew up?
An artist, a poet, and President of the United States. Now, I wouldn’t mind being an artist or a poet - but, man-o-man - I would not want to be President!
If you could meet any YA character, who would you meet?
Spencer Martin (Scarlett’s brother in Maureen Johnson’s books)
If you were a cartoon character, who would you be?
I’d want to be Bugs Bunny, but I’d probably end up more like Elmer Fudd!
Thanks again Julia for stopping by and to those readers out there, I have my review of XVI that will be posted tomorrow so stay tuned!
Posted by Danna (Bananas For Books) at 5:35 AM