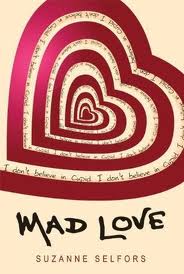 Suzanne Selfors is the author of many literary works that include Coffee House Angel and her newest work Mad Love. You can reach her at www.suzanneselfors.com there you can see the trailer for Mad Love as well as at the bottom of this post. Here's my interview with her.

Describe your book in three words:

Girl meets Cupid.
Who do you relate most to in Mad Love?
I most relate to the mother character, Belinda Amorous. Because she's a fulltime working writer and because she has a teen daughter. Though I don't have bi-polar disorder as she does, I have struggled with depression.
What's the craziest thing you've ever done?
Maye it wasn't crazy but now that I look back on it, I think it was really brave. I went to Europe with my bestfriend when I was 18 and traveled all over with a backpack and passport. I'd never been away from home on my own. It was one of the best things I've ever done.
If you were a cartoon character, who would you be?
My favorite cartoon character is that lovesick skunk, Pepe le Peuw, (have no idea how to spell it.)
When you were little, what did you want to be when you grew up?
I wanted to be a marine biologist. I grew up on an island and we lived on the water so I had access to a beach.
Posted by Danna (Bananas For Books) at 2:00 PM