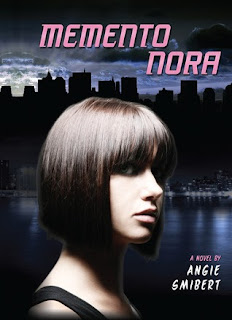 
Synopsis:
Nora, the popular girl and happy consumer, witnesses a horrific bombing on a shopping trip with her mother. In Nora’s near-future world, terrorism is so commonplace that she can pop one little white pill to forget and go on like nothing ever happened. However, when Nora makes her first trip to a Therapeutic Forgetting Clinic, she learns what her mother, a frequent forgetter, has been frequently forgetting. Nora secretly spits out the pill and holds on to her memories. The memory of the bombing as well as her mother’s secret and her budding awareness of the world outside her little clique make it increasingly difficult for Nora to cope. She turns to two new friends, each with their own reasons to remember, and together they share their experiences with their classmates through an underground comic. They soon learn, though, they can’t get away with remembering.

Memento Nora was exactly what I was hoping for it to be and I’m glad I was able to snag a copy early.
The story is told in three different perspectives: Nora’s, Micah’s, and Winter’s. It did get confusing at times, but at the beginning of each chapter, it had the character’s name on the side. I enjoyed Nora’s perspective the most because her life was really interesting with her family drama and such. Actually, the whole world of Memento Nora was interesting to read about. There were lots of terrorist attacks and they would be so traumatizing that people would go to the TFC-the Therapeutic Forgetting Clinic. There, you would take a white pill and forget that anything bad ever happened.
Nora goes to the TFC and meets Micah. She decides (with some help from Micah) not to take the pill. After that, she and Micah meet again in the school and thus begins the making of the comic Memento. Oh, there’s also Micah’s best friend Winter who helps out too. I didn’t feel like there was enough of her in the book though. The author had her be a lesbian, but barely showed anything about it.
The ending was unexpected to me and it didn’t give me very many answers to my questions. Angie Smibert says she’s working on the sequel though, so I hope they get answered then. Overall, Memento Nora was an exciting book about what could certainly happen in the future. Her characters were bright and her writing was simple. I liked that this book was small yet it packed a big punch.
Grade: 4 Stars
Posted by Danna (Bananas For Books) at 5:05 AM