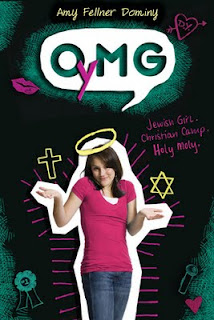 
Describe your book in three words:Speechless at speechcamp.
Who do you relate to most in (OyMG)?I relate mostly to Ellie who isn’t me, but who could have been.  Or, maybe it’s that I could have been her?  I lived with her in my head for such a long time, that I feel like we would have been BFFs.
What’s the craziest thing you’ve ever done? When I was 21, I went to Paris with my sister.  I got tired of spending so much time in one city and wanted to explore Italy.  She said no.  So I said good-bye. I got a train ticket and spent a wonderful few days in Florence, Italy.  By myself.  I look back on that now and it seems crazy!
If you could bring any YA character to life, who would you choose?At the risk of sounding schmaltzy (Yiddish for “excessive sentimentality”), I’d choose Zeydeh, Ellie’s grandfather.  There’s a part of him that reminds me of my dad who passed away in 2007.  Zeydeh is old and bony, but I still know he gives great hugs.
When you were little, what did you want to be when you grew up?I always wanted to be a movie star.  I was very into theater all through high school. And when I got to college my first major was theater performance.  It didn’t take more than a semester to change that! As it turned out, I was much better writing the plays than acting in them.
What is your favorite Band(s)?  I have to confess that I’m not an adventurous music person.  If it’s not being played on contemporary rock stations or country, then I’ve probably never heard it.  Right now, I get jazzed if a Lifehouse song comes on.   I also love to listen to old favorites like Meatloaf and Bon Jovi.
If you were a cartoon character, who would you be?I’d be Velma, the smart, practical one from Scooby Doo.  But secretly, I wish I was Daphne, the hotty one.
Posted by Danna (Bananas For Books) at 5:13 AM