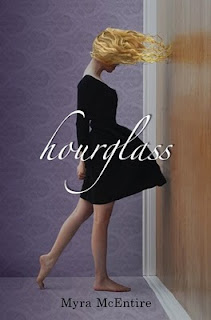 
Synopsis:
For seventeen-year-old Emerson Cole, life is about seeing what isn’t there: swooning Southern Belles; soldiers long forgotten; a haunting jazz trio that vanishes in an instant. Plagued by phantoms since her parents’ death, she just wants the apparitions to stop so she can be normal. She’s tried everything, but the visions keep coming back.So when her well-meaning brother brings in a consultant from a secretive organization called the Hourglass, Emerson’s willing to try one last cure. But meeting Michael Weaver may not only change her future, it may change her past.
Who is this dark, mysterious, sympathetic guy, barely older than Emerson herself, who seems to believe every crazy word she says? Why does an electric charge seem to run through the room whenever he’s around? And why is he so insistent that he needs her help to prevent a death that never should have happened?

I absolutely love this cover and that’s one of the reasons I wanted to read it. I can’t say that I enjoyed this book as much as I thought I would though.
Emerson was a great MC. I liked that even though she thought she was crazy she still retained a somewhat normal life. My favorite character would have to be her brother Thomas though. He took care of her even though he and his wife had their own problems to deal with.
The relationships in this book seemed very rushed. With Emerson and Michael’s romance, there was almost no developing with it. They just had a powerful connection and then they loved each other. Also, the day after she meets Kaleb (son of the Hourglass founder), he asks her if she cares about him. To me, that’s too sudden for a person you just met.
Myra’s writing didn’t really impress me as much as I thought it would. At times, she had Emerson “telling” us her feelings more than she was showing them. I did like the way she kept the story enticing though. Also, the psychic topic is overused, but Myra made it seem new again.
Hourglass was a great debut and I can’t wait to read the next one. I recommend this for lovers of paranormal and romance books.
Grade: 4 Stars
Posted by Danna (Bananas For Books) at 5:01 AM