Review: With or Without You by Brian Farrey 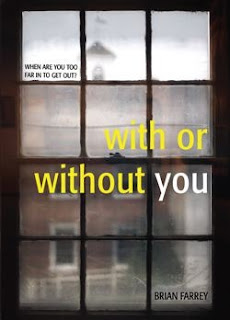 
Synopsis:
Eighteen year-old Evan and his best friend, Davis, get beaten up for being loners. For being gay. For just being themselves. But as rough as things often seem, at least Evan can take comfort in his sweet, sexy boyfriend Erik--whom he’s kept secret from everyone for almost a year.
Then Evan and Davis are recruited to join the Chasers, a fringe crowd that promises them protection and status. Davis is swept up in the excitement, but Evan is caught between his loyalty to Davis and his love for Erik. Evan’s lied to keep his two worlds separate. Now his lies are about to implode…and destroy the very relationships he’s been trying to protect.


With or Without You is the first LGBT book I’ve read that has sounded realistic to me. I know a bunch of people (family and friends) who are gay, lesbian, or bisexual (haven’t met a transgender yet) so having these kinds of books out there is important to me because I think it helps people understand that there’s nothing wrong with it.
I felt really bad for Evan and Davis, especially since what they went through happens all the time (getting beat up just for being homosexual). Evan was someone I would’ve wanted to be friends with. He cared a lot about his family, his friend, and his boyfriend. Erik-Evan’s boyfriend- was really sweet and I wish all guys were like him.
This book had a lot of different issues in it like love, having AIDS, and dealing with bullying. They all came together to make this wonderful story. With or Without You was one of few LGBT books I’ve loved and I hope you love it too! 4.5 Stars!
Posted by Danna (Bananas For Books) at 5:49 AM