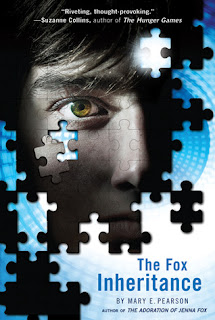 
Synopsis:
Once there were three. Three friends who loved each other—Jenna, Locke, and Kara. And after a terrible accident destroyed their bodies, their three minds were kept alive, spinning in a digital netherworld. Even in that disembodied nightmare, they were still together. At least at first. When Jenna disappeared, Locke and Kara had to go on without her. Decades passed, and then centuries.
Two-hundred-and-sixty years later, they have been released at last. Given new, perfect bodies, Locke and Kara awaken to a world they know nothing about, where everyone they once knew and loved is long dead.
Everyone except Jenna Fox.


The Adoration of Jenna Fox was one of the best books I read last year and I was so excited when I heard a second book was coming out. Mary E. Pearson totally outdid herself again with The Fox Inheritance.
The companion novel to The Adoration of Jenna Fox is set 260 years after Jenna’s story and it’s told in the perspective of Locke. I found it interesting how Pearson transformed this book into a dystopian by splitting the United States in two and having bots exist, etc.
I found Locke’s point of view very interesting. His thoughts and feelings didn’t really come out as girly to me as some male povs do, I felt like I was actually inside the mind of a dude.  Kara was a great character too, but I found her character too cliché. It seemed like she would never get over being trapped for 260 years when it only took Locke about a year to forgive Jenna.
The Fox Inheritance was a good book, but I wish there would’ve been more Jenna in it. I hope there’s a second book because it ended with a cliff-hanger.
Posted by Danna (Bananas For Books) at 6:42 AM