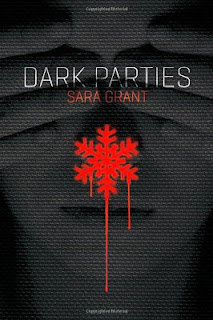 
Synopsis:
Sixteen-year-old Neva has been trapped since birth. She was born and raised under the Protectosphere, in an isolated nation ruled by fear, lies, and xenophobia. A shield "protects" them from the outside world, but also locks the citizens inside. But there's nothing left on the outside, ever since the world collapsed from violent warfare. Or so the government says... Neva and her best friend Sanna believe the government is lying and stage a "dark party" to recruit members for their underground rebellion. But as Neva begins to uncover the truth, she realizes she must question everything she's ever known, including the people she loves the most.


Dark Parties is the first book in awhile that I’ve finished in one day. I absolutely loved it and I’m glad that I won a copy.
First off, the main character’s name is super cool (Neva) and she’s an awesome character. I liked that she stood up for what she believed in and didn’t let people boss her around. Another character I liked was her mom. It seemed like she had tons of secrets and I wish that there would’ve been more background on her.
The writing kept me totally fused with reading the book. I sat down on my chair and read for hours because of all the action and mystery inside. I did feel like sex was a big factor in this book, but it didn’t consume it.
Dystopias are making it big in the book world and I can’t wait to read more. You should definitely read Dark Parties if you like the genre.
Posted by Danna (Bananas For Books) at 6:56 AM