Review: Stolen Away by Alyxandra Harvey 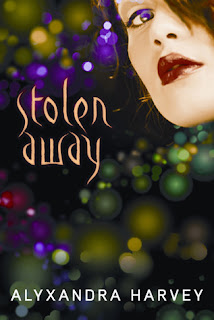 
Synopsis:
For seventeen years, Eloise Hart had no idea the world of Faery even existed. Now she has been abducted and trapped in the Rath of Lord Strahan, King of Faery. Strahan was only meant to rule for seven years, as Faery tradition dictates, and then give up his crown to another. But he won't comply, and now chaos threatens both worlds.
The only one who can break his stranglehold on the Faery court is his wife. . . Eloise's aunt Antonia. Using Eloise to lure Antonia, Strahan captures his wife, desperate to end the only threat to his reign. Now Eloise must become the rescuer. Together with her best friends Jo and Devin, she must forge alliances with other Fae, including a gorgeous protector named Lucas, and Strahan's mysterious son, Eldric-who may or may not betray them.

I’ve read Alyxandra Harvey’s book Haunting Violet before and really liked it so I was excited to read Stolen Away. The points of views change each chapter from Eloise to her best friend Jo. In my opinion, I thought that Eloise’s perspective was more appealing because there were more action and fae scenes going on.  I also liked Eloise’s more because her relationship with Lucas wasn’t instant while Jo and Eldric were macking on each other after just meeting. Another thing I would've wanted was more of Eloise's Aunt Antonia because she seemed like an important figure.
The writing was really good and I felt entertained the whole time. In fact, I actually started and finished the book the day I got it. I can see why Harvey’s books are so popular. The fae theme was attention-grabbing also. I liked how the author incorporated old faery tales and poems into the story; it made it feel real.
Stolen Away was a very pleasant read and I’m surprised I haven’t read more fairy books.
Posted by Danna (Bananas For Books) at 7:15 AM