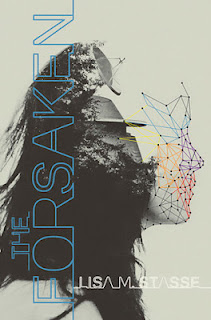 As an obedient orphan of the U.N.A. (the super-country that was once Mexico, the U.S., and Canada), Alenna learned at an early age to blend in and be quiet—having your parents taken by the police will do that to a girl. But Alenna can’t help but stand out when she fails a test that all sixteen-year-olds have to take: The test says she has a high capacity for brutal violence, and so she is sent to The Wheel, an island where all would-be criminals end up.
The life expectancy of prisoners on The Wheel is just two years, but with dirty, violent, and chaotic conditions, the time seems a lot longer as Alenna is forced to deal with civil wars for land ownership and machines that snatch kids out of their makeshift homes. Desperate, she and the other prisoners concoct a potentially fatal plan to flee the island. Survival may seem impossible, but Alenna is determined to achieve it anyway.


The Forsaken reminded me a lot of The Hunger Games and The Maze Runner. There was action, good writing, and a dystopian world in which evil people rule the nation. I was surprised, excited, and became quite angry during this book which pretty much is a sign that you should read the book.

However, I only give the novel 3 ½ stars because of two items: the main character and the romance in the book. Alenna Shawcross as a whole was a fantastic heroine and very relatable, but I hated how she was so indecisive about a boy. One moment she would say she wanted to be with him and the next she would change her mind and say it was wrong (that process repeated a lot). The romance between Alenna and Liam was the huge thing that prevented me from saying this was the best dystopian I’ve read this year. It was very insta-lovey because the book takes place over about a month and most of Alenna’s time is not spent with Liam, it’s spent with her best friend who happens to be in love with Liam.

My favorite characters were secondary characters David and Rika. I loved how Stasse made the village people quirky while still being serious. The main characters were great, but it seems like other background characters always get overlooked. You will definitely notice them in this book.

The action was my favorite part of the novel. Major character development happened over the big fight scenes and training scenes with Gadya and Alenna. Their friendship built over time and felt very real especially over the epic training sessions. There was also a lot of death in The Forsaken and the author made it so all of the characters had something that would give readers something to be sad about.

The Forsaken is a great debut to a new series and although it wasn’t my favorite, I still can’t wait to read the
second book.

Quote: “Gadya joins me in attacking the feeler with our frozen hands. Miniature gears grind inside the tentacles. For a moment, I think the feeler is going to give up because we’re dragging it down a little. Maybe the three of us can outweigh it after all. Get it to the ground and destroy it, like we did to the one on the lake…” Page 295


*Received this book for review, does not effect my thoughts on this novel.