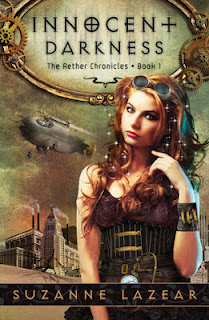 Wish. Love. Desire. Live.
Sixteen-year-old Noli Braddock's hoyden ways land her in an abusive reform school far from home. On mid-summer's eve she wishes to be anyplace but that dreadful school. A mysterious man from the Realm of Faerie rescues her and brings her to the Otherworld, only to reveal that she must be sacrificed, otherwise, the entire Otherworld civilization will perish.

Steampunk is becoming more and more popular each day so I was delighted to be able to get a copy of Innocent Darkness at ALA. It was full of action, faeries, and was a good read.

The beginning of the book was fantastic because the author’s imagery helped me see the world Noli lived in. I loved how there were flying automobiles, but I wish there would’ve been more of the steampunk world included in the book. Her best friend “V” was my favorite character because he was smart, adorable, and the boy next door everyone loves. Their friendship was very real even though there were secrets being kept.

One thing I know a lot of books don’t have in it is the parents. This novel is not the case because Noli and her mother were very close and all through the book all she wanted to do is go home back to her mother.  Noli’s character was pure yet wild which I find the most exciting in main characters.

The ending is what really bothered me. There was insta-love with secondary characters and it kind of ruined the story for me. Also, the whole ending seemed very rushed with one main problem being solved all because of a coincidence. There was also a very big change in character for V which I suppose could be understandable for some, but for me it felt like he was bipolar.

I really wish that the author had written more about the Otherworld and it’s different species living there. The characters would talk about “dangerous” things being in other parts of the Otherworld, but would just leave it at that.

Overall, I liked the book and would give it 3 stars. It was a good start to a new series and I can’t wait to find out what happens next in Noli’s world.
comments powered by Disqus
Posted by Danna (Bananas For Books) at 8:28 AM