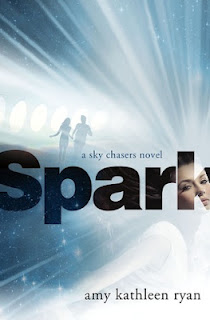 Waverly and Kieran are finally reunited on the Empyrean. Kieran has led the boys safely up to this point, and now that the girls are back, their mission seems slightly less impossible: to chase down the New Horizon, and save their parents from the enemy ship. But nothing is truly as it seems…Kieran’s leadership methods have raised Seth’s hackles— and Waverly’s suspicions. Is this really her fiancé? The handsome, loving boy she was torn from just a short time before? More and more, she finds her thoughts aligned with Seth’s. But if Seth is Kieran’s Enemy No. 1, what does that make her?
In one night, a strange explosion rocks the Empyrean—shooting them off course and delaying their pursuit of the New Horizon—and Seth is mysteriously released from the brig. Seth is the most obvious suspect for the explosion, and Waverly the most obvious suspect for releasing him. As the tension reaches a boiling point, will Seth be able to find the true culprit before Kieran locks them both away—or worse? Will Waverly follow her heart, even if it puts lives at risk? With the balance of power precarious and the clock ticking, every decision counts… every step brings them closer to a new beginning, or a sudden end...

THIS REVIEW HAS SPOILERS IN IT, YOU HAVE BEEN WARNED....
After reading Glow, I immediately jumped onto reading Spark. The sequel matched its predecessor and even exceeded my expectations of what a sequel should be. It kept me hooked, entertained, and leaving me wanting more by the end. Doing reviews on sequels is hard for me because 1. They have spoilers and 2. I feel like I say the same things about both books, however this review might be a little different.

We get to learn more about Keiran and Seth in the second book and how their characters have and have not changed. At times, it felt like Keiran was a dictator and just the things he did made me so upset! Seth and Waverly were my favorite people in the book. After her going through drastic changes in book two it helped her see more clearly and had her be more alert to what’s going around. I liked that she and the other girls in this book weren’t going to sit and let the boys run the show.

There wasn’t as much action, but I think that the drama made up for it. There were twists in the Emyrean’s government and nothing was stable. The scenes made me angry, happy, and wanting to pull my hair out all at the same time.  The cliff hanger in this book just made me scream. If you hate cliffhangers, you might want to wait to read this until the third book comes out because this was seriously the worst cliffhanger I’ve read.

The romance in this book was soft and subtle. The relationship starts out as friendship then at the end a budding romance happens. I liked that there isn’t really a love triangle and Waverly isn’t trying to choose between one and another.

Overall Spark was definitely the book I wanted it to be and I think that many other readers will think the same. I need book three, like, right now. 4.5 Stars.
Go here: http://media.us.macmillan.com/video/olmk/macmillanaudio/spark_ch1_escape.mp3 to hear some of the audio book of Spark!
*Received from publisher for review, does not effect my thoughts or feelings about the book.
Posted by Danna (Bananas For Books) at 8:20 AM