Review: I Swear by Lane Davis 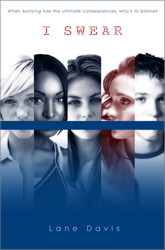 Who’s to blame when bullying leads to suicide? A gripping exploration of crucial importance seeks answers in and out of the courtroom.After years of abuse from her classmates, and thinking she had no other options, Leslie took her own life. Now her abusers are dealing with the fallout. In the eyes of the accused girls, they are not to blame: Leslie chose to take her life. She chose to be the coward they always knew she was.
As criminal proceedings examine the systematic cyber bullying and harassment that occurred, the girls vow to keep their stories straight and make Leslie seem weak. But as the events leading up to her death unfold, it becomes clear that although Leslie took her own life, her bullies took everything else.
Told in alternating perspectives and through well-paced flashbacks, this timely novel sheds light on both the victims of bullying and the consequences bullies face.

Almost everyone has been bullied or has bullied someone once in their life and now more and more people are becoming aware of it. It’s absolutely disgusting what teenagers can do to one another and this book showed just how far things can go.

Leslie had a good future ahead of her and an amazing guy next to her but that ended when Macie and the rest of her group started bullying her and telling her to kill herself. The stories of four people who were in Leslie’s life and bullied her/or just didn’t do anything about it are told. It was somewhat confusing with four different POVs, but it was interesting to see the different thoughts of them. The queen bee Macie disgusted me because the bullying started because she wanted Jake who wanted Leslie. I’m glad her POV wasn’t told or I would’ve been undeniably angry at a fictional character for months.

I’m glad that more books about bullying are coming out, because reading them can change a person and they show how words can hurt. I Swear is a heartbreaking story you want to read. 4.5 Stars!
Posted by Danna (Bananas For Books) at 12:30 AM