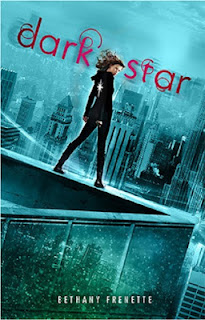 Audrey Whitticomb has nothing to fear. Her mother is the superhero Morning Star, the most deadly crime-fighter in the Twin Cities, so it's hard for Audrey not to feel safe. That is, until she's lured into the sweet night air by something human and not human--something with talons and teeth, and a wide, scarlet smile.
Now Audrey knows the truth: her mom doesn't fight crime at night. She fights Harrowers--livid, merciless beings who were trapped Beneath eons ago. Yet some have managed to escape. And they want Audrey dead, just because of who she is: one of the Kin.
To survive, Audrey will need to sharpen the powers she has always had. When she gets close to someone, dark corners of the person's memories become her own, and she sometimes even glimpses the future. If Audrey could only get close to Patrick Tigue, a powerful Harrower masquerading as human, she could use her Knowing to discover the Harrowers' next move. But Leon, her mother's bossy, infuriatingly attractive sidekick, has other ideas. Lately, he won't let Audrey out of his sight.
When an unthinkable betrayal puts Minneapolis in terrible danger, Audrey discovers a wild, untamed power within herself. It may be the key to saving her herself, her family, and her city. Or it may be the force that destroys everything--and everyone--she loves.

Dark Star was a fun, exciting read about a teenager whose Mom was maybe not-so-normal. The characters were pretty easy to relate to and I found that Audrey was a likeable teenage girl POV. A lot of times in YA books the main girl characters have a tendency to swoon a lot, but not Audrey. She thought about ways to help others and better herself while also dealing with school, a superhero mom, and her mom’s sidekick who lately hasn’t been letting her go out of his sight.

The world of Dark Star was written in a way that I could believe that super powered guardians could hunt down harrowers (demons) in the streets of a major area. At times it was hard to believe some of the characters and what they were saying, but it didn’t ruin the story for me. I would say that this book was a little break from life and that boys and girls would enjoy it. I’m going to keep this review short and sweet and give this book 3 stars.
Posted by Danna (Bananas For Books) at 12:30 AM