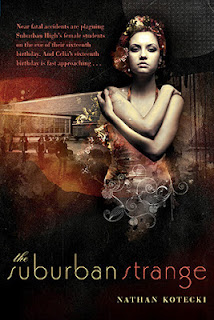 Shy Celia Balaustine is new to Suburban High, but a mysterious group of sophomores called the Rosary has befriended her. Friends aside, Celia soon discovers something is not quite right at Suburban. Girls at the school begin having near-fatal accidents on the eve of their sixteenth birthdays. Who is causing the accidents, and why? As Celia’s own birthday approaches, she is inexorably drawn into an underground conflict between good and evil—the Kind and the Unkind—that bubbles beneath Suburban High. Plentiful references to music and art—along with the intriguing underworld mythology—make this supernatural series debut a page-turner.

The Suburban Strange was strangely addicting and a very eloquent read. It starts off as a contemporary and then shifts into paranormal. Nathan Kotecki’s writing is fantastic and I really hope there’s a second book.

Celia Balaustine is a girl with whom most teen girls can relate to. She’s transitioning from being a background shy person to a bold sophisticated girl with an intimidating group of friends. The Rosary was a very cool and mysterious group that did everything together. I loved reading about them going to Diaboliques and it made me wish my town had its own dark enchanting club.

This book is one of the few paranormal stories that I’ve read and mostly loved. The Kind and The Unkind idea was a little unoriginal, but the author made the story easy to jump into with providing characters that weren’t invincible and were actually semi-normal. I felt connected to (at least) one character in particular-Mariette. She was the girl who was nice to everyone and seemed normal on the outside, but really she had a big secret she could only tell to people like her.

The Suburban Strange kept me guessing on who the villain was and I didn’t guess correctly until the almost end. I liked that it wasn’t always predictable which had me flipping pages like crazy so I could find out what would happen to the characters. I didn’t like how slow it was at first and sometimes the book got a little cheesy and had parts in it that weren’t needed though.

Overall, I give this book 3.5 stars and am hoping for a second book because I seriously need to read more of Celia’s story.