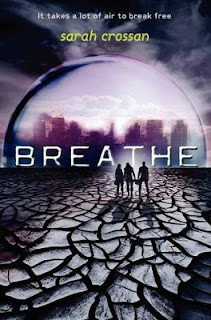 Inhale. Exhale.
Breathe.
Breathe.
Breathe . . .
The world is dead.
The survivors live under the protection of Breathe, the corporation that found a way to manufacture oxygen-rich air.
Alina
has been stealing for a long time. She's a little jittery, but not terrified. All she knows is that she's never been caught before. If she's careful, it'll be easy. If she's careful.
Quinn
should be worried about Alina and a bit afraid for himself, too, but even though this is dangerous, it's also the most interesting thing to happen to him in ages. It isn't every day that the girl of your dreams asks you to rescue her.
Bea
wants to tell him that none of this is fair; they'd planned a trip together, the two of them, and she'd hoped he'd discover her out here, not another girl.
And as they walk into the Outlands with two days' worth of oxygen in their tanks, everything they believe will be shattered. Will they be able to make it back? Will they want to?

Breathe is an amazing start to a new dystopian series filled with action, romance, and great writing. The whole idea of Earth’s oxygen being depleted and having domes all over the world where people are “addicted” to the air is very original and I’m glad I got the opportunity to read this book.

The book switches POVs between Bea, Quinn, and Alina. I have to say that I wish there would’ve only been one or two POVs because I got confused at times, but it was very interesting to read what the characters were thinking. My favorite character was Alina because she was kick-butt when dealing with Breathe (the company who made and controlled the air). Quinn and Bea were also great characters as well because they wanted to help others.

Most of the book happened outside the dome and many characters were introduced including drifters. I wished there would’ve been more details on them and who they were before becoming outcasts. I think that Maude-the main drifter in Breathe- developed the most in the story.

Sarah Crossan made a great book which teens and adults will thoroughly enjoy. I’m excited for the next book to come out in 2013. 4 stars!