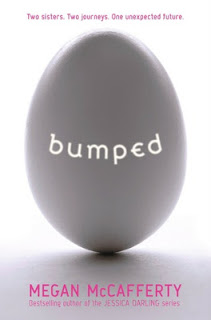 When a virus makes everyone over the age of eighteen infertile, would-be parents pay teen girls to conceive and give birth to their children, making teens the most prized members of society. Girls sport fake baby bumps and the school cafeteria stocks folic-acid-infused food.
Sixteen-year-old identical twins Melody and Harmony were separated at birth and have never met until the day Harmony shows up on Melody's doorstep. Up to now, the twins have followed completely opposite paths. Melody has scored an enviable conception contract with a couple called the Jaydens. While they are searching for the perfect partner for Melody to bump with, she is fighting her attraction to her best friend, Zen, who is way too short for the job.
Harmony has spent her whole life in Goodside, a religious community, preparing to be a wife and mother. She believes her calling is to convince Melody that pregging for profit is a sin. But Harmony has secrets of her own that she is running from.
When Melody is finally matched with the world-famous, genetically flawless Jondoe, both girls' lives are changed forever. A case of mistaken identity takes them on a journey neither could have ever imagined, one that makes Melody and Harmony realize they have so much more than just DNA in common.

I adored Megan McCafferty’s Jessica Darling series so you can imagine how excited I was to read her new young adult series. I was a little disappointed with this first book, but it was still really good and full of laughs.

\Harmony and Melody are twin sisters who were separated at birth and came to find each other when they were sixteen; I found their relationship interesting to read about because they were almost complete opposites. I liked how it developed through the book and they came to love and accept each other.  My favorite sister was Melody because she had a more open mind and I related more to her than Harmony who had been raised with a strict Christian upbringing.

I found it unique how Megan McCafferty made it so teen pregnancy in the world of Bumped was accepted and even encouraged unlike today’s society where if a thirteen to seventeen year old girl gets pregnant, she’s considered a slut (and yes, I agree with most that it’s definitely not cool to have sex when your fourteen). I also liked how she created new words/phrases to go with the futuristic world like “insufficient verticality” (yes that verticality) and “bumped”.

One thing I didn’t like about Bumped was how non-chalantly sex was talked about in this book. This is definitely a book for more mature teen readers (I’d say 14-15+). The other disappointment was the characters. I felt like I couldn’t connect to some of them and most of them were superficial and unreal, but is a lot of funniness in this book and I give it 3.5 stars!

Source: Arcycling:)
Posted by Danna (Bananas For Books) at 8:21 PM