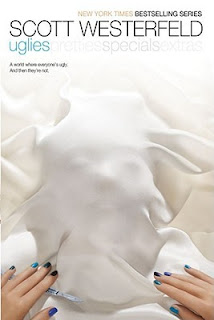 Tally’s adventures begin in Uglies, where she learns the truth about what life as a Pretty really means. She rebels against the surgery that will make her a Pretty, but ultimately succumbs. In Pretties, Tally has forgotten all about her Ugly life, and when she’s reminded, she has a hard time listening. And what little’s left of the old Tally is further compromised in Specials, because Tally has been transformed into a fierce fighting machine. But when she’s offered a chance to forever improve civilization, will she be able to overcome her brainwashing? The answer is evident years later in Extras, after the Pretty regime has ended. Boundless human creativity, new technologies, and old dangers have been unleashed upon the world. But fame and popularity can be just as dangerous as extreme beauty….

I first read this book about four years ago and remembered loving it and so I decided that since the boxed series was on sale on BN.com, I would buy the new covers and reread the series. Scott Westerfeld has been one of my favorite authors since I was thirteen and rereading this book made me want to get back into reading more. The characters were well developed over time and I felt like I got to know each one personally. I related myself more to Tally who teetered on the edge of abandoning what she's known all her life or staying within the nicely made lines of her society.

Westerfeld made this dystopian world believable and fun to read about because being pretty now is what it's all about for most people. It was interesting reading about how Uglies would call themselves and others ugly, fat, skinny, etc just because they grew up knowing that the Pretties were the best and eventually everyone would become one. I'm reading book number two right now and I can still say to this day that the Uglies series is one of my favorite young adult series because it makes sense (and that may not make sense to you, but just go along with it). The only thing I didn't really like was the romance because it happened so fast and it was one of those relationships where it hurt other people.
All in all, I loved this book and if you haven't read it already, you should probably read it right now or else you're bogus (fo reals).