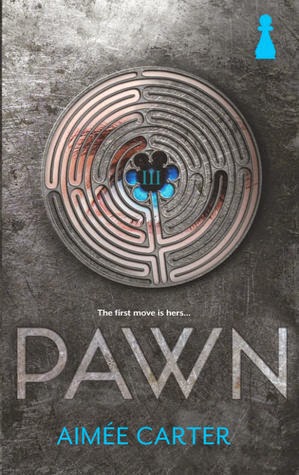 For Kitty Doe, it seems like an easy choice. She can either spend her life as a III in misery, looked down upon by the higher ranks and forced to leave the people she loves, or she can become a VII and join the most powerful family in the country.

If she says yes, Kitty will be Masked—surgically transformed into Lila Hart, the Prime Minister's niece, who died under mysterious circumstances. As a member of the Hart family, she will be famous. She will be adored. And for the first time, she will matter.

There's only one catch. She must also stop the rebellion that Lila secretly fostered, the same one that got her killed …and one Kitty believes in. Faced with threats, conspiracies and a life that's not her own, she must decide which path to choose—and learn how to become more than a pawn in a twisted game she's only beginning to understand.

I didn't really like Aimee Carter's Goddess series books so I wasn't really expecting to enjoy this but the synopsis really caught my attention and I adore dystopian novels so I decided to try this one out and I actually ended up really enjoying it.

I like that the author introduced the readers to the main character Kitty before diving into the whole "masking" part of the novel. I really enjoyed reading about her life in the world as an orphan and as a person taking the test to see what number she'd have. I think that there could have been a little more development in the relationship between Kitty and her boyfriend but the rest of the novel makes up for that.

After the slow beginning, the book turns into a fast paced novel with twists and turns all throughout. I really like that Aimee Carter dived into the plot by mixing in action with suspense. The characters were well done and I ended up hating some of them (in a good way) while liking others. I didn't necessarily enjoy Kitty's character that much because she complained a lot, but I think she really developed throughout the novel.

By the end of Pawn, I was dying to read book two to find out where Kitty's story would take her. Guys, this book is really good and I think you should read it. I like it a lot better than Aimee Carter's previous series and I think people who enjoyed that series will like this one even more.