Review: Taking Off by Jenny Moss 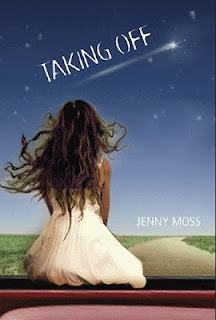 
Synopsis:
Reimagining the days surrounding this unforgettable event in history, readers are brought back to 1986 as the astronauts prepare for the Challenger mission, and Christa McAullife trains to be the first teacher in space. When a teen named Annie meets Christa, she is fascinated by Christa's courage. Truly inspired, Annie is determined to make it to Florida to see the Challenger launch, a trip that will forever change how she thinks about herself and her secret desire for her own future. Although she is devastated when tragedy strikes, Annie honors Christa by following her own dream, despite the obstacles. Bringing in her experience as a NASA engineer, Jenny Moss weaves a moving story that recaptures the inspiration teens must have felt years ago as they watched Christa McAuliffe reach for the sky.

My Thoughts:
I was born ten years after the Challenger accident, so this subject was brand new to me. It starts off with the reader learning about Annie’s life in “spacey” Texas where she has the seemingly best boyfriend and the awesome best friend. That friend, Lea, invites her to her mother’s dinner party where soon to be teachernaut Christa McCauliffe would be. She accepts and later talks to Christa at the party. I thought that Christa was magnificently portrayed in this novel. Through Annie, I got to experience how Christa inspired people.
Annie then goes on a road trip with her dad and his hot twenty-one year old co-worker, Tommy. Do you guys see where this is going? I loved how Annie and Tommy’s relationship developed. She knew that she already had a boyfriend so she friended Tommy. Then it gently grew into something more. The relationship between her and her father was an interesting one too. I could feel her frustration with him because he was so laid back when she wanted to get to Christa’s launch in time.
I did feel like something was missing though. Nothing big or anything, but I felt like after the Challenger tragedy ended, so did the excitement. I guess that it was a conclusion so it was suppose to start slowing down, but the accident happened a third of the way through the book and there were still, like, fifty pages left!
Overall, Taking Off was a beautiful story filled with love, laughter, and excitement. I can’t wait to read some more Jenny Moss books!
Grade: 4 Stars
Posted by Danna (Bananas For Books) at 5:14 AM