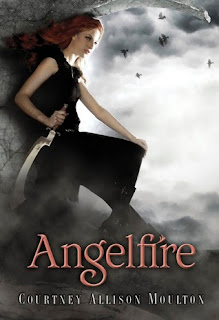 
Synopsis:
When seventeen-year-old Ellie starts seeing reapers - monstrous creatures who devour humans and send their souls to Hell - she finds herself on the front lines of a supernatural war between archangels and the Fallen and faced with the possible destruction of her soul.
A mysterious boy named Will reveals she is the reincarnation of an ancient warrior, the only one capable of wielding swords of angelfire to fight the reapers, and he is an immortal sworn to protect her in battle. Now that Ellie's powers have been awakened, a powerful reaper called Bastian has come forward to challenge her. He has employed a fierce assassin to eliminate her - an assassin who has already killed her once.
While balancing her dwindling social life and reaper-hunting duties, she and Will discover Bastian is searching for a dormant creature believed to be a true soul reaper. Bastian plans to use this weapon to ignite the End of Days and to destroy Ellie's soul, ending her rebirth cycle forever. Now, she must face an army of Bastian's most frightening reapers, prevent the soul reaper from consuming her soul, and uncover the secrets of her past lives - including truths that may be too frightening to remember.


One word: Wow. I seriously couldn’t stop reading this book and when it ended, I wanted to cry because I didn’t have the second book.
I loved that this book wasn’t your average story where the main character finds out that he/she is suppose to save the world and tries to ignore it altogether. Ellie denied it at first, but it wasn’t anything major, she accepted it and went on to train with Will.
Let me just say that I loved Will and Ellie’s interactions. If you go onto Courtney’s blog, you can see a few hilarious pictures that she drew of the book. They match the descriptions perfectly. Another thing I loved about Will and Ellie was that they weren’t obsessed with each other in the first fifty pages. Ellie actually wanted to punch Will if he thought about kissing her.
The mythology in Angelfire was like a breath of fresh air. I loved how Courtney took an old legend and made it seem brand new. Everything was connected, but it did get confusing sometimes with hearing about all the new monster names and stuff.
I am definitely getting myself a finished copy of this book and I rarely buy books that I already have ARCs for. I’m in love and I can’t wait to see where Courtney takes the rest of the series. This book aced my test.
Grade: 5 Stars
Posted by Danna (Bananas For Books) at 5:25 AM