Review: The Girl Who Became a Beatle 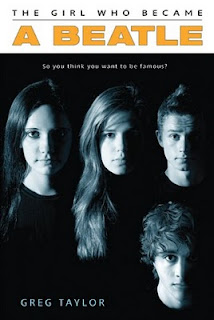 
Synopsis:
She loves you, yeah, yeah, yeah!
When Regina Bloomsbury’s band, the Caverns, breaks up, she thinks it’s all over. And then she makes a wish—
“I wish I could be as famous as the Beatles.”
The Beatles are her music idols. The next day, she gets up to find that the Caverns are not just as famous as the Beatles, they have replaced them in history! Regina is living like a rock star, and loving it. There are talk shows, music videos, and live concerts with thousands of screaming fans. And Regina is the star of it all.
But fame is getting the better of Regina, and she has a decision to make. Does she want to replace the Beatles forever?

I liked the Beatles so that’s why I wanted to read this book and I’m glad I did.
Regina Bloomsbury has a band, The Caverns, that breaks up and she can’t believe it and thinks everything is going to go downhill from there. She then wishes that she could be as famous as the Beatles. Her wish comes true except that her band has replaced the Beatles in history! All the Beatles songs are now “written by Regina” and everyone loves her and The Caverns. What could go wrong?
The idea of the story and Greg’s writing was like a breath of fresh air. I’m a big music lover so I just had to read this story because the Beatles were one of the best artists in the world. I do think that the beginning went a little too fast though. It started out with Regina waking up to worrying if her bassist and drummer would quit to join another band and I really wanted it to start with the band having a rehearsal or something that could introduce the characters a little bit better.
The characters were great and my favorite would have to be Julian, the lead guitarist in The Caverns. He’s been Regina’s best friend ever since they started the band and he really cares about her and music. Another thing I liked about the characters was that Regina’s parents didn’t “disappear”. I hate it when main characters parents rarely show their faces in books so having her dad all over the place had me feeling even more relatable to her.
The Girl Who Became a Beatle was a magnificent story and it had a happy ending (for all of you who like happy endings). It kicked butt and I can’t wait to read some more Greg Taylor books!
Grade: 4.5 Stars
Posted by Danna (Bananas For Books) at 5:20 AM