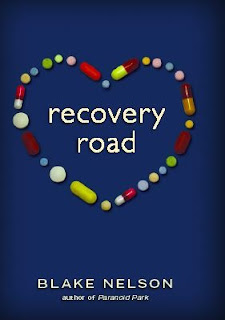 
Synopsis:
Madeline is sent away to Spring Meadows to help with a drinking and rage problem she has. It's a pretty intense place, but there is the weekly movie night in town--where Madeline meets Stewart, who's at another rehab place nearby. They fall for each other during a really crazy time in their lives. Madeline gets out and tries to get back on her feet, waiting for Stewart to join her. When he does, though, it's not the ideal recovery world Madeline dreamed of. Both of them still have serious problems. And Stewart's are only getting worse....

My Thoughts:
It’s not every day you read a book about drug rehab. I found this subject to be refreshing and informative (in a fun way). I love the cover’s simplicity and that’s one of the reasons why I wanted to read the book.
Madeline was a very interesting character and I liked how Blake Nelson made her someone most girls could relate to. Her journey through the book is a sad and realistic one. She starts at the rehab center as a person who doesn’t think that she needs help, but then as she moves up and her weeks come to an end she realizes that she wants to change.
The romance between her and Stewart was cute. I liked how they were awkward around each other at first, but then gradually became friends and then a couple.They both became sober together so they had a special connection.
The way Blake Nelson writes is emotional and yet simple. All through the book, I felt like Madeline was talking to me, not talking at me. Spoiler When Trish-her best friend-died, I felt like my best friend had died too. Spoiler over
Recovery Road is a marvelous story about love, drug abuse, and overcoming challenges that most people are sure to enjoy!
Grade: 4.5 Stars
Posted by Danna (Bananas For Books) at 5:13 AM