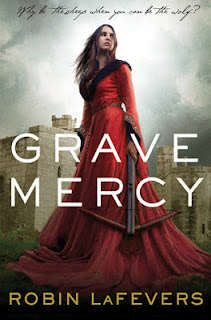 Why be the sheep, when you can be the wolf?
Seventeen-year-old Ismae escapes from the brutality of an arranged marriage into the sanctuary of the convent of St. Mortain, where the sisters still serve the gods of old. Here she learns that the god of Death Himself has blessed her with dangerous gifts—and a violent destiny. If she chooses to stay at the convent, she will be trained as an assassin and serve as a handmaiden to Death. To claim her new life, she must destroy the lives of others.
Ismae’s most important assignment takes her straight into the high court of Brittany—where she finds herself woefully under prepared—not only for the deadly games of intrigue and treason, but for the impossible choices she must make. For how can she deliver Death’s vengeance upon a target who, against her will, has stolen her heart?

I have a love/hate relationship with historical fictions because a lot of them contain too much romance for me. I went into this book expecting a lot of kick butt assassin action happening and that’s exactly what I received. Of course there was a little romance to the novel, but I think it added to the story.

I liked how the book began with telling how Ismae came to live and be trained at the convent. There was a lot of world building and I loved how I got to read about Ismae’s relations with her fellow “sisters” and St. Mortain. Ismae was a character I could really relate to because she didn’t want a man to rule her life and she knew what she wanted to do and how she wanted to do it. All through Grave Mercy, Ismae is finding her true self and understanding what it is to be a handmaiden of death.  Two other characters I loved that were different were Annith and Sybella. The other two books in this series are actually about them and I’m glad the author made/is making separate books for each of the girls because I want to know more about them.

I know I said the romance added to the novel, but it felt a bit rushed in the beginning. SPOIL ALERT!!! For example, Ismae mostly focused on her goals and almost hated Duval and then in the middle-end of the book she had a sudden realization that she loved him and then by the end they were wanting to be married.

Grave Mercy was a great start to a new series and I’m excited to read Dark Triumph which features Sybella’s story. If you enjoy historical fiction and/or stories with assassins, you will enjoy this. 4.5 stars!
Source: Bought
Posted by Danna (Bananas For Books) at 7:55 AM