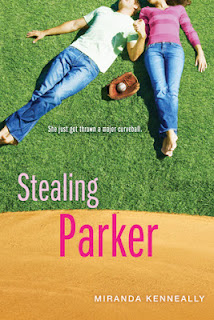 Parker Shelton pretty much has the perfect life. She’s on her way to becoming valedictorian at Hundred Oaks High, she’s made the all-star softball team, and she has plenty of friends. Then her mother’s scandal rocks their small town and suddenly no one will talk to her.
Now Parker wants a new life.
So she quits softball. Drops twenty pounds. And she figures why kiss one guy when she can kiss three? Or four. Why limit herself to high school boys when the majorly cute new baseball coach seems especially flirty?
But how far is too far before she loses herself completely?

I got an ARC of Stealing Parker signed at ALA Annual last year and I sadly neglected to read it until now. I’m not that interested in contemporary novels, but this book was really cute and I related to it because I myself was a female sports player (basketball). I finished it in two and a half sittings and it left me wanting to read Catching Jordan, Things I Can’t Forget, and the upcoming book Racing Savannah.

Parker was a character that I could believe was real. Her mother had just left her family to live with her girlfriend after coming out; her brother was spiraling out of control; and Parker herself was changing into someone she didn’t want to be. I love how Miranda Kenneally made the factors in Parker’s life so realistic. I really felt a true parent connection between Parker and her mom and it made me sad that she alienated her mother because she “tore her family apart”.

What I didn’t like about this book was the relationship between Parker, a seventeen year old girl, and Brian, a twenty-three year old assistant coach for the boy’s baseball team. I am seventeen years old and ew, that’s just kinda gross (six years isn’t bad, but it kinda is when one of them is a minor). I personally, was team Corndog (Will) and I think he’s what really made this book adorable for me. I mean, who doesn’t want a cute boy who actually cares about you and doesn’t want you for just the physical stuff?

All in all, Stealing Parker was a cute summer read for me and I’m excited to read more of Kenneally’s books. 3.5 stars!
Posted by Danna (Bananas For Books) at 8:00 AM