Review: My Heart and Other Black Holes 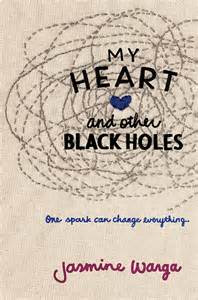 The much talked about debut novel of Jasmine Wanga.


Sixteen-year-old physics nerd Aysel is obsessed with plotting her own death. With a mother who can barely look at her without wincing, classmates who whisper behind her back, and a father whose violent crime rocked her small town, Aysel is ready to turn her potential energy into nothingness.There's only one problem: she's not sure she has the courage to do it alone. But once she discovers a website with a section called Suicide Partners, Aysel's convinced she's found her solution—Roman, a teenage boy who's haunted by a family tragedy, is looking for a partner. Even though Aysel and Roman have nothing in common, they slowly start to fill in each other's broken lives. But as their suicide pact becomes more concrete, Aysel begins to question whether she really wants to go through with it. Ultimately, she must choose between wanting to die or trying to convince Roman to live so they can discover the potential of their energy together.﻿
SUMMARY: Aysel believes that she is ready to die. Her depressiveness has taken over her entire being, and the little black slug inside of her won't even let her feel happiness anymore. With her father in prison, and her mother unaware of her struggle, she feels like she has no one to turn to. Suicide seems like her only answer, but she doesn't want to go alone. She finds a "Suicide Partner" online; a teenage boy named Roman whose life is just as broken, but in different ways. As they plan their demise, Aysel starts to realize that she doesn't want Roman to die. Now she has to figure out how to stop him, while still wanting to go through with it herself.
PROS: I really liked the way that this story was written, and the personality Aysel. I think that she's a very relatable person, and that her life is original and interesting. It's funny that I find her relatable, because she sees the world so differently. She sees it as one big physics equation full of potential energy.
CONS: I loved Roman as a character, and I think that he was perfect for Aysel, but I also thought that he was a little too convenient. All of their issues were predictively picked to drive them closer together.
RATE: It's a painful read, but worth it. 4.5 out of 5 books (because books are better than stars)
Posted by Danna (Bananas For Books) at 1:59 PM