Review: An Abundance of Katherines 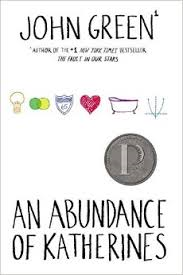 I wanted to give this book a review, because even though we all know that John Green is a great author, this book seems to have been ignored by a lot of readers.

Michael L. Printz Honor BookKatherine V thought boys were gross
Katherine X just wanted to be friends
Katherine XVIII dumped him in an e-mail
K-19 broke his heart
When it comes to relationships, Colin Singleton's type happens to be girls named Katherine. And when it comes to girls named Katherine, Colin is always getting dumped. Nineteen times, to be exact.On a road trip miles from home, this anagram-happy, washed-up child prodigy has ten thousand dollars in his pocket, a bloodthirsty feral hog on his trail, and an overweight, Judge Judy-loving best friend riding shotgun—but no Katherines. Colin is on a mission to prove The Theorem of Underlying Katherine Predictability, which he hopes will predict the future of any relationship, avenge Dumpees everywhere, and finally win him the girl.Love, friendship, and a dead Austro-Hungarian archduke add up to surprising and heart-changing conclusions in this ingeniously layered comic novel about reinventing oneself.

SUMMARY: Colin Singleton has been told his entire life that he was special; he was a prodigy. The thing about prodigies though, is that they're different than geniuses. Prodigies absorb information at a very young age, they're talented beyond belief, but only until they reach the point where the world has caught up to them. Colin doesn't feel special, he just feel lonely and heartbroken as he has officially had 19 failed relationships with 19 different Katherines. He and his best friend gather up their money and decide to just go on a road trip; escape. They wind up in this tiny town that is only still running because of the one remaining factory (a tampon factory). The whole time, Colin is just desperately trying to come up with an equation to determine successful relationships.
PROS: This book was so witty and nerdy that I couldn't help but falling for it instantaneously. The story was just so incredibly interesting to me. It was the geeky kind of humor that I live for and I was laughing pretty much the entire time I was reading it. To make it even better though, it was excellently written and complex.
CONS: I don't really have any complaints about this book, but a lot of people had trouble keeping up with the vocabulary and the math that you actually have to figure out to understand the novel completely, but this book does contain plenty of side notes that do help explain things without making the novel too crowded.
RATE: If you have not read this yet, I absolutely suggest you do. I will go on record saying that I thought it was better than Paper Towns. 5 out of 5 books (because books are better than stars).
Posted by Danna (Bananas For Books) at 3:51 PM