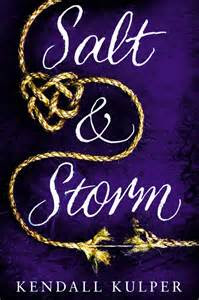 THIS BOOK HAS ALREADY BEEN REVIEWED ON THIS BLOG BY DANNA, BUT WE DECIDED THAT YOU MIGHT WANT TO READ ANOTHER PERSPECTIVE. I HAVE NOT READ HER REVIEW.

An interesting tale about magic, love, and trying to escape the inevitable.

A sweeping historical romance about a witch who foresees her own murder--and the one boy who can help change her future.
Sixteen-year-old Avery Roe wants only to take her rightful place as the witch of Prince Island, making the charms that keep the island's whalers safe at sea, but her mother has forced her into a magic-free world of proper manners and respectability. When Avery dreams she's to be murdered, she knows time is running out to unlock her magic and save herself.
Avery finds an unexpected ally in a tattooed harpoon boy named Tane--a sailor with magic of his own, who moves Avery in ways she never expected. Becoming a witch might stop her murder and save her island from ruin, but Avery discovers her magic requires a sacrifice she never prepared for.
Summary: Avery has a magic inside of her that is unique to her family alone, and she only ever really experienced it when she lived with her grandmother as a child -- the greatest witch on their island. One day her mother takes her way from it, all of magic is forbidden in what Avery would call a prison of a house with a Pastor step-father, and his overly mannered daughters. Avery has always been able to read dreams, and she has one that foretells her murder. Now her only hope at survival is returning to her grandmother with the aid of the obviously gorgeous and mysterious Tane; who has magic Avery's never seen before.
PROS: Now, I know this book somewhat revolves around the likely-hood of the main character getting killed off, but it was also a very fun story. It was very lively and it involved a lot of love, let-downs, and hope. A very good combination.
CONS: The ending, sadly, fell a little short for me. Which is sad when you become so invested in the beginning and middle, and then the ending is simply good but not entirely satisfying.
RATE: 3.6 out of 5 books (because books are better than stars).
Posted by Danna (Bananas For Books) at 2:36 PM